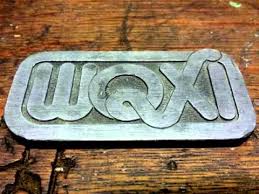 I was still in High School but spent all the time I could listening to radio.  I dreamed of one day working at my favorite radio Station WQXI.  “Quixie n Dixie” was a powerhouse known around the Country as one of the best in the business.  Under the direction of General Manager Jerry Blum, WQXI AM and FM featured The Gary McKee morning show.  I’d wake up every morning listening to Gary, Willis, and Yetta.  I remember calling Gary on the request line and he let me do the station  I.D. (which I still have on tape!)

During my senior year I visited the radio station and interviewed Ike Newkirk for a school project.  Walking into the radio station was an amazing feeling especially going “behind the scenes”.  I inquired about the station mascot “The Quixie Quacker” and Ike told me “we have all the Quackers we need.”  Six months later I got a call from WQXI asking me if I was still interested in being the station mascot.  The rest is history as I joined the Quixie family and entertained WQXI and 94-Q listeners for 11 years while working part time on air. It was on air personality Kelly McCoy who taught me all about radio giving me my first chance to actually touch a control board!  I went on the air for the first time on WQXI AM from midnight to 6 a.m. on Christmas Eve in 1978.  I was able to say the i.d. once an hour.  I’ll always remember how nervous I was!  (By 3 a.m. I was playing my own album cuts! What a pro, already breaking format my first day on the air!!)

I ran the board for 94-Q (WQXI FM) playing the Scott Shannon Countdown  show on vinyl no less!  The jock coming in at 10 a.m. that Sunday was late so I phoned program director Jim Morrison who gave me the OK to do a couple of breaks.  (Still have that tape!)  Then one cold winter night the night jock Karen Harrison couldn’t make it in because her driveway was iced over so Jim asked me if I wanted to work and I immediately felt so nervous but went in and opened the mic and began my FM career.  (I remember Gary McKee and the entire morning show coming in and giving me props for sounding good but surprised to see the station mascot on the air!)

An appearance at a local nightclub during a station sponsored event!  (original Quixie Quacker costume.)

Once the radio station saw how motivated I was to be their mascot, they invested $1,500 for a duck costume that I helped design. 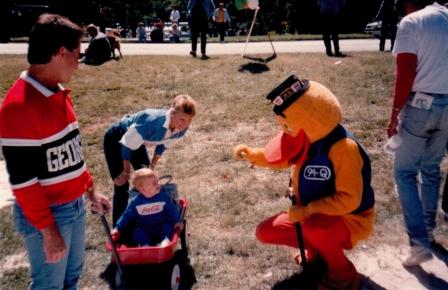 I am blessed to have gotten my “webbed” foot in the door of WQXI and grateful to all of those who encouraged me.

I kept winning prizes even when I worked at WQXI!  The biggest prize I won is HERE!