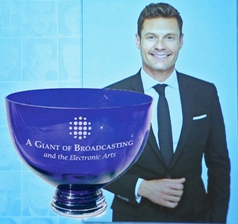 Back in 1992 I was working at Star 94 FM in Atlanta from 7 p.m. – midnight.  I received a call from a very enthusiastic Ryan Seacrest who was attending Dunwoody High School.  He did the morning announcements and wanted to brush up on his pop culture and learn about radio.  I invited Ryan to the station, we became friends and I saw the same passion and talent for broadcasting in Ryan that I had in myself.  Over the course of the next nine months, I taught Ryan everything I knew about radio and on Labor Day weekend, September of 1992 I put Ryan on the air for the first infamous broadcast of his radio career!

Here’s a picture of Ryan and Tom a few years later!