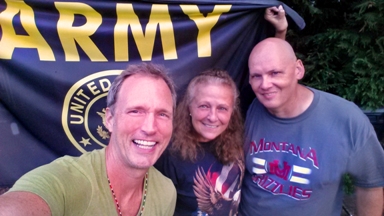 I was honored to become the first civilian to ever to Host and Emcee a Change of Command Service from one Four Star General to another in one of the Army’s most revered traditions.  And I was invited back four years later to do it all again.  The thrill of working with the U.S. Army was one of the best experiences I’ve ever had and truly appreciate the friendships and accolades for a job well done.  #Hooah!

While on base, I became friends with Major Kevin Wooley who invited me to the “bunker” known as FORSCOM.  After 21 years of loyal service, Major Wooley retired and I spoke about he and his wife Karen on Atlanta’s NBC affiliate.

Did you see Britain’s Royal Navy tribute to Mariah Carey?